On The Creative Process

Quadrillions of bits have been spilled on the subject of the creative process, and it plays a major role in the work of every graphic designer. As a designer, aka “creative mercenary,” the two most important aspects of the service I provide are creativity and implementation. Essentially: ideation followed by execution. I’m also hired for my years of experience along with my skills to produce what you need for a website, logo, signage, book, package, ad, brochure, trade show booth — all the deliverables from concepts to completed visual materials that contribute to the success of your business.

In thinking about creativity in particular, I am reminded of the cartoon depicting two characters looking at a classic flowchart diagram that includes a box at a pivotal intersection of the chart. That box is labelled “THEN A MIRACLE OCCURS.” Since most miracles are a mystery, and creativity is rather a mystery, you could easily swap into the chart at that point a box that’s labelled “THEN CREATIVITY OCCURS.”

There’s a quote from industrial designer Marko Pavlovic that comes to mind when thinking about creativity and business:

“Other than nature, everything on planet earth must be designed.”

Another apparently small observation that is huge in its implications: ALL man-made objects have been designed by someone. In business, ALL methods to produce, promote, and deliver products and services must be DESIGNED. The better the designs, the greater the success of those businesses, and good (read: effective) design demands creativity.

Since it serves such a crucial role in design for business, people do wonder:  where does it come from? Creativity, I mean.

Some argue that creativity is an inherent and perhaps heritable trait; that it cannot be “taught.” Anecdotally, we’ve all noticed that some people seem to be more “creative” than others, but I don’t know if there has ever been an objective study of this trait in humans. It’s hard to quantify.

There certainly are things that “creatives” (that’s what designers are often called) can and do practice as a means of enhancing and nurturing their creativity; to inspire and invigorate it.

Not to reveal any trade secrets or anything, but here are a few of the measures I know of which serve to keep the creative edge sharp —

Approach every assignment, project, task, with an open mind. Some call this the “beginner’s mind.” Like the kid who repeatedly asks “why.” Being open to the unexpected is a part of this as well. Chinese artists from centuries ago as well as Pablo Picasso, and even Bob Ross of “Joy of Painting” fame have each extolled the value of “the happy accident.” A brush gone awry can lead to an entirely new concept. The corollary to this is to stay curious. Curiosity is creativity’s best friend. Look up Alexander Fleming and Penicillin if you don’t believe me.

Mine the Whole World

This involves keeping open to what’s around you. Going places and seeing things with fresh eyes. For designers, this includes experiencing not only art and museums, but also nature and even the “mundane” things with a questioning heart. It’s a kind of “cross training.” It’s where you get out into other things that may seem unrelated at first, but may contain grist for the creative mill. Playing with other kinds of “media” can help there. Getting the heck off the computer and doing some “natural media” art: crayons, brushes, pencils, fingerpainting … sand at the beach! Actors do something akin to this. They watch other people. They observe and see what they can derive from the activities, quirks, and behaviors of others. Juxtaposition of unlike things triggers new thought pathways.

Messiness and chaos is not a bad thing. Not that my studio should be “the wrath” and look like a hurricane struck (though sometimes it does). But passage through chaos is good for creativity. This includes considering that there are no “bad” ideas, only more inpuuuut (as the little robot once said) to the entire process. Being “non-linear” is an asset. Take the side trips and see what’s down that road. I keep a notebook with me all the time for notes on stuff that pops in when I’m doing something else.

I’ve learned not to try to force creativity. Deadlines can cut both ways in this: a long deadline makes for contemplation while a short one with urgency can make for some of the more interesting “leaps.” Not building in some rest-time however can cause the muse to elude you. Some of my best ideas have arrived while driving down the street. Pull over! Write it down! It’s kind of like landing an airplane — if you try to force a landing that’s been problematic (basically ungraceful — or not a “stabilized approach”) since 15 miles out, it’ll probably not go well. Go around and try again. When I was a programmer, some of my fiercest “bugs” got solved just by taking a walk around the block, or going over to a colleague’s cubicle and describing the problem out loud. Presto! The answer would come! Corollary to this is to do something completely different (courtesy Monty Python) for a while. Dance, watch a movie, browse antiques, do something other, more, ELSE!

Yes. I said “cope,” not crumple, not cower from, not even encourage it. The truth is, it can be un-fun and valuable at the same time. It’s good to let it in if you can. Whether it’s a comment on the work or a helpful observation, outside perspectives are useful. I have had a few cases where a client said “what if” or “how about” and I had to set aside initial doubts to take an unbiased look. Results can be interesting with this.

Some ideas come in a flash and stay fabulous. Others come by shelving the ideas for a day or over night, or whatever, and having another look at it all LATER! Don’t necessarily jump right in with the first idea. Let others happen, too.

Try a “Lightning Round”

Go somewhere else and do a bunch of sketches as fast as you can. Don’t judge as you do them, just draw. This can clear the cobwebs. It’s a free-association free-for-all!

I often say to my clients about print projects that “at some point, ink must hit paper.” On the face of it, this seems a simple notion, but you’d be surprised how many folks don’t take this into account. And that’s the PRODUCTION step. Creativity enters even into the “nuts and bolts” of realizing the visual work in the tangible world, even if the work is digital. Techniques and materials are a factor in this step, and creative choices for those can lift a project from ordinary to buzz-worthy.

For designers who’ve been doing creative work for years, odds are high that they can do it again. That’s also a key aspect of experience. Having been in the business for a while does have its benefits. 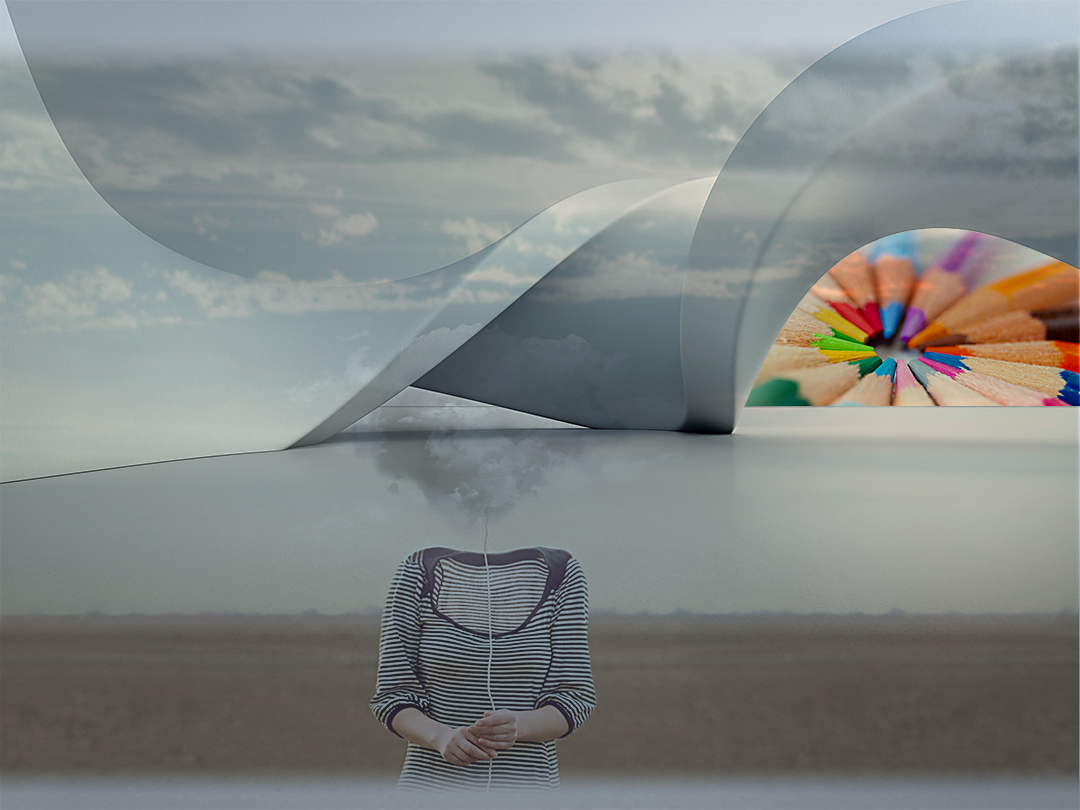