For visual designers, there are two basic kinds of contrast:  Contrast in color, and contrast in composition. When I design for you, I bring my knowledge of and experience with contrast into the picture (pun intended).

In color, there are literally millions of contrasts. These are achieved through any given color’s three axes of hue, saturation, and value (aka lightness or brightness). Hue, saturation, and value were recognized aspects of color long before they were displayed via the Internet or on digital screens. These aspects of color are at play in ink, in paint, and in any other medium you care to name.

HUE is the color itself: red, orange, purple, green. An allied term is what we call “local color,” (and not in the cultural sense!)  Local color refers to *the* hue of an object in question, such as it appears without the admixture of shadows or highlights or by the reflections of the colors of adjacent objects. An apple’s local color can be simple red, but if it is brightly lit from one side, the red can appear “shaded” across the shape of the apple, from bright to dark in shade.

SATURATION is the intensity of the color, its “purity” or vividness, describable as being either more or less saturated depending on the degree of apparent “grayness” that is perceptible in the color.

All three of these aspects of colors create the contrasts between them. In design, as in all artwork, contrast creates dynamism and impact. It is the very nature of every image. Contrast of color is the lifeblood of design. Contrast contributes to legibility if it is handled well, and legibility is crucial for visual communications, whether in print or digital media.

More about hue, saturation, and value

Designers also need to consider color contrast / legibility from a practical point of view. At least some percentage of the world’s population (some assessments have up to 1 in 12 men and 1 in 200 women) suffers from one of the various types of color blindness.

The concept of simultaneous contrast is a subcategory of contrast in colors. The term “simultaneous contrast” first appeared in scientist and color theorist Michel Chevrèul’s book titled The Principle of Harmony and Contrast of Colors, published in the French language in 1839, and translated into English in 1854.

The principle of simultaneous contrast states that when two different colors are placed side by side, they affect one another by virtue of their proximity or juxtaposition and can also create a perception of a third color in the human eye. The neo-impressionist artist Georges Seurat utilized simultaneous contrast specifically and consciously in his pointillist painting technique, so this idea has been with us for a long time. Some say that this concept was already highly developed from the earliest stages in the creation of tapestries.

It is a form of simultaneous contrast that allows us to perceive the colors presented to us in all digital media. ALL colors in digital media are represented by the overall effect of discreet individual pixels displayed on a screen, and then as blended in the eye of the beholder into a perceived color. This is nothing short of digital pointillism.

It is also a form of simultaneous contrast that allows us to perceive colors when presented by discreet individual dots of color on a printed page. Take a close look with a magnifying glass at any printed piece produced with process colors (i.e. that does NOT consist entirely of spot color inks), and you will see these dots in action. This is a kind of pointillism, too.

The Uses of Contrast in Colors

Many websites for the sake of accessibility offer options for the visually impaired (not only the color blind) to be able to view them in “large-print” as well as in a higher (boosted) contrast mode. When I combine text and images in my work, I am always mindful of contrast for legibility, and I have to say that I have seen many missteps in these areas both in print and digital media.

Often in print I notice that the creators were not mindful of the fact that colors viewed on a digital monitor (RGB colors, represented by transmitted light) very often do not reflect how they will appear in print (as ink on paper, colors represented by reflected light). This unawareness creates issues not only of basic legibility, but also often compromises the intentions of the design itself as effective communication.

In digital media, I see that creators sometimes do not take into account the fact that every digital screen out in the real world displays the content a little differently, depending on the size, age, and screen settings or calibrations of the device a person is using. Contrast needs to be carefully considered to take this factor into account.

The most basic manifestation of this principle is seen in texts that are headlines contrasted in size with texts that are subheadings or paragraphs. Used in composition, this kind of contrast can engage the viewer and help guide their focus and wayfinding through the information. Such contrasts help organize the information for the viewer by establishing a hierarchy of focus. Variations in the size and placement of layout elements can also create visual interest, dynamics, and impact.

Without contrast there is no substance to our visual perceptions of the world. We’ve all heard the old joke about a blank sheet of white paper depicting a polar bear in a snowstorm. Contrast is key. We so often hear that on the Internet “content is king.” In all visual communications, contrast is king. The Miele-Fleury Graphics logo is a homage to the power and possibilities inherent in the simple and fundamental contrast of black and white.

Without black, we do not see the white.

Without white, we do not see the black. 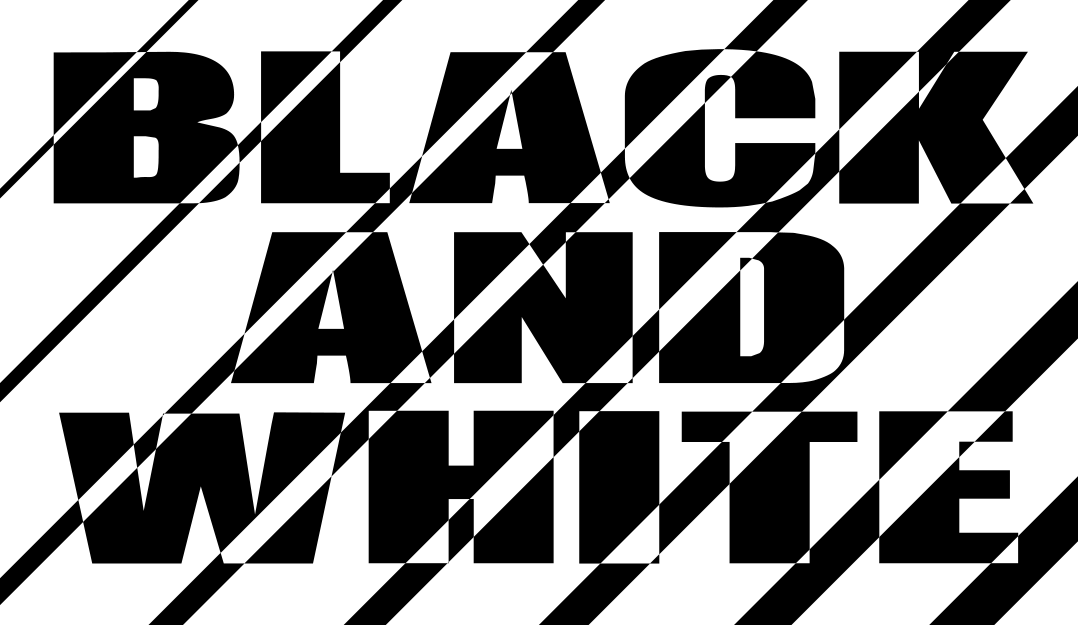