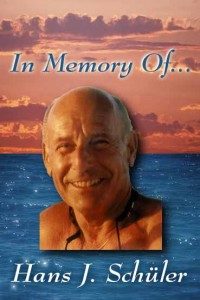 Written by his brother, Charles H. Miele, and edited by his niece, Janni Miele.

Hans Juergen Schüler was born in Cologne, Germany, on August 8th, 1926, the son of Dr. jur. Paul Schüler and Sofie, née Heidkämper. It was just before the Great Depression after World War I.

Sofie had divorced her first husband, Hubert Joseph Clemens Miele, and with her she had taken her first son (Heinrich Karl Clemens Hubert Miele), who they called “Karl Heinz” (who later changed his name to Charles H. Miele). Sofie then married Dr. Schüler and a very young Karl Heinz from that day forward — to his everlasting sadness — remained a Miele in name only.

Hans’ father Paul Schüler had been an officer in the German Army during World War I in the trenches of Verdun. He had joined while still under age and soon became commander of an infantry company through exceptional knowledge of military matters, and great valor as a leader. He earned the Iron Cross as one of the youngest officers in the German army. While still a law student, Paul became the judicial officer of a postwar army unit that carried on a dedicated fight against communism in Germany after 1918.

So it was that young Hans was brought up in almost military discipline from a very early age, which came in handy much later when he served in the American Army Signal Corps. The tragedy was that in the Germany of the 1930s, because Hans’ father was of Jewish descent, the family became outcasts despite Paul Schüler’s many medals and a certificate of exceptional military service to his country. For the Schüler family, when the Nazis took power their lives were changed forever . . . as were the lives of so very many. During those dark days of the Nazi time, Hans suffered many undeserved insults and defeats as he began his young life, but he never lost his great sense of humor or his charisma. People automatically loved Hans for the kind of fellow he was.

The first liberation of the Schüler family came just before Christmas (December 22nd, 1938), when they were able to narrowly escape the SS during the confusion of a debilitating holiday blizzard that had struck Köln (Cologne). Paul had departed a few days earlier on the pretense of a business trip, and the plan was for Sofie to follow with the two boys, to “join him for the holidays.” So it was that Sofie with her charm and bravery got her sons past an armed German officer on the station platform, averting a too-close inspection of their papers, and the three boarded a train bound for Holland.

American relatives in Chicago had heard of their plight, and of the infamous Kristallnacht — when Jews were shot down in the streets and their businesses demolished with crowbars, rocks and machine guns. The relatives sent money to support the family and planned to have them come to the United States. These plans were thwarted by long bureaucratic delays and the takeover of Holland by Nazi troops in May of 1940. In peril once again, the Schüler family was finally forced to go underground, supported by Dutch friends and anti-Nazis. Hans and his brother Charles worked in the Dutch Resistance, doing a fair amount of sabotage and other damage to the Occupation.

Still, both brothers managed to graduate from high school during the war. Charles was soon thereafter discovered by German intelligence as a student at the University of Utrecht and forcibly inducted into the German Navy, where he did his best to stay out of trouble while simultaneously doing whatever damage he could to the Nazi war effort.

The boys were reunited in 1944, when Charles (finally suspected by the German military authorities for his activities) went AWOL from the German Navy while posted in Italy and made his way home. Hans helped his brother to get false papers and disappear into the Resistance network as a Dutch citizen.

When it was all over in May of 1945, the boys renewed their applications to emigrate to the United States, and were finally able to start a new life in August of 1947 in Chicago, Illinois. Encouraged and supported by their Chicago relatives, Hans and Charles went to night school and each eventually graduated from college, while at the same time raising their young families.

Hans became an avid sportsman, teaching Judo to his local police department, downhill skiing, sailing, and playing racquetball. Charles moonlighted as a photographer with his own processing lab at home, and took in occasional German-English or English-German translation work on the side to make ends meet. Both Hans and Charles eventually drifted into metallurgy and got well-paying jobs in industry. Each had a son and a daughter. Hans became a computer expert early on and converted his company’s chemical lab into a fully modern laboratory employing spectrography and other advanced methods of metals analysis. He worked there for 40 years.

Both brothers loved the water. Hans opted for sailing and Charles for motor cruisers. They spent many happy hours and days plying the waves of Lake Michigan and the Chain of Lakes in northern Illinois. Hans cruised the Inland Waterway, the Atlantic, and the Caribbean. He became an expert navigator and — as the more adventurous of the two brothers — he dreamed of sailing all the way around the world . . . some day.

Returning from a business trip to Canada, Hans drove his late model Corvette which was his pride and joy. On the way back to Chicago, he encountered a traffic jam outside Detroit and pulled off the road to take a break. Well off the road: about 60 feet. He had just gotten out of the car to make a call on his cellular phone, when a young man in a Ford Escort lost control of his vehicle. The Escort, traveling in the opposite direction at high speed, crossed the median and four lanes of opposing traffic, and slammed down the embankment where Hans’ car stood. It was lifted into the air and when it came down, Hans could not get out of the way. Both drivers were killed instantly. The young man’s girlfriend, a passenger in the Escort, barely survived.

Hans touched the lives of many people as a friend and mentor. He was generous to a fault with money and moral support for everyone who needed him. Energetic and often described as “larger than life,” he could never sit still for long. Traveling was one of his delights in life. After he retired from his company, he stayed on as a technical marketing consultant, even enlisting the help of competitors for the common good in the import and export of metal alloys, uniting them in healthy trade relations with suppliers in Mexico and Canada.

Hans Schüler made many friends through the years. He had been in America exactly fifty years, one month, and four days. He was one in a million. He will never be forgotten by the people whose lives he touched. May our tears soothe his soul, and the remembrance of all the good he bestowed on so many be an inspiration to us all.